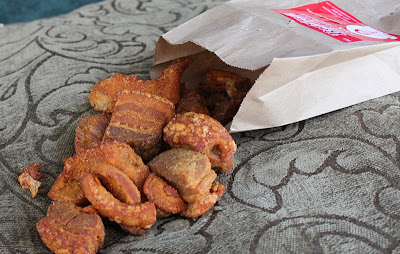 -- It was a pleasant drive to Port Barre for our most recent venture onto the Cracklin Trail and low-and-behold we were not disappointed: Just the opposite really.  These cracklin are touted as being "world famous."  Truth is, a lot of homemade items at Bourque's are given that title.  I'll leave the veracity of such claims to another thread.  Suffice it to say that these cracklin were fresh, super meaty, crunchy with a perfect complement of fatty moisture adding texture and tons of flavor.  There was the hint of sweetness in the seasoning which we wish had been a touch hotter, but that is really just quibbling.  We'll be back for these and we suggest that you give'em a try. 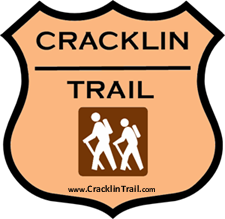 Crunchy chunks of fried pork skin, fat, and meat: seasoned to perfection and served warm from the black pot. Cracklins are one of the most decadent snacks around and no matter what you call them (cracklin, cracklins, crackling, or gratons) they are delicious. Cracklins begin as small cubes of pork skin, fat, and meat. They are fried for upwards of an hour in hog lard and then cooled and re-fried until they "pop."

You may find high-end chefs and culinary personalities incorporating versions of cracklin into their cooking, but at its heart these nuggets of soul satisfying comfort food are a Louisiana creation and the best-of-the-best are found in the Pelican State.

The Cracklin Trail puts you in the driver's seat to find the best homemade cracklins around.

What part of the cracklins do you most like to eat?